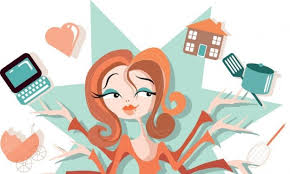 Just when you get a chance to sit down to write…the baby cries in her crib waking from her nap much earlier than anticipated. But then she gives you that huge, toothless grin making you feel like a hero swooping in to save her from the dark.

Just when you finally get to the washroom…your 5 year old needs to talk and opens the door believing it is perfectly normal to carry on a conversation with mom while she’s on the toilet. But then he finishes that convo with “You’re my bestest mommy ever!” Wait, what? How many mommies do you have…never mind, I get it and I’ll take it.

Just when you think you might have an afternoon to watch a movie…it’s three days later and you’re still only half way through it. But then when you finally get to finish it you realize you got two movie afternoons instead of one.

Just when you’ve made yourself a steaming cup of tea…the phone rings, someone’s at the door, and it’s time to pick up your child at school…you return to iced tea. But then your child hugs you and asks that you have a snack together while he chats about his day.

Just when you grab that cable bill you’ve been meaning to get to…you realize it’s a week overdue.  But then…there’s no upside to this one except it’s only a week overdue.

Just when you’ve purchased that book you’ve been itching to read for a few months…it’s a month later and the book hasn’t left the store’s bag; it is buried under flyers and school work and all sorts of paper that life throws at you somewhere in the pile on that spot on the kitchen counter reserved for miscellaneous…which helps to explain the past due cable bill. But then that magical moment happens when hubby is out bike riding with child 1 and child 2 is napping and all is quiet and there is nothing else to do but read. Ah!

Just when there’s that beautiful sunny day…you can’t use your backyard since the swampy mess is still there because you’ve missed the landscaper’s calls because of course he always calls while you’re trying to get your baby to nap so you can get some writing time. But then that sunny day is followed by three days of rain giving the landscaper time to get to your house and figure out a game plan.

Just when you sit to watch a little mind-numbing television (or television to take away the numbing of your mind)…hubby wants to talk about work and current events and house stuff and gossip and cool places to travel or to eat…you know, normal adult stuff that your brain has trouble computing.  But then your mind wakes up a little and you remember what it’s like to be you.

Just when you think you can get a moment to yourself…it’s 9 o’clock and in your world that basically means it’s almost midnight (since you’ll be up one or two times with the baby and sleeping in has become a hazy memory of a very distant past)…it’s time to get to sleep so you can do it all over again the next day. But then the baby strangely wakes up, feeds and allows you to sleep until 6 am…almost 9 hours of sleep! Amazing. I can do anything after that much sleep!

What are your just when…but then moments?

2 thoughts on “Just When…But Then…”