I am a first generation Canadian born to Colombian parents with a long Colombian ancestry. I grew up eating arepas, sancocho, frijoles, chicharron and aguacate. My favourite fruits were mango, papaya and pineapple. I went to my junior kindergarten class speaking Spanish because that’s all we spoke at home. I knew that being Colombian in Toronto years and years ago was strange. Most of my friends were of European descent and when I spoke Spanish with my parents they all assumed we were from Spain. Colombia was foreign and different and let’s face it, it did not have the best reputation.

(Nearly) every person we came across would mention the word cocaine as soon as they heard we were Colombian, followed closely by drug cartels and Pablo Escobar. My culture and people were smeared by the actions of world-class criminals and the world media that focused on and sensationalised them. My parents, and their cohorts, would retaliate with Colombia is also the land of coffee, emeralds, fruit and a rich history of music and folklore. Gabriel Garcia Marquez is Colombian. Colombians are a loving, friendly people. Resourceful, determined and above all, passionate. To which people would nod and say “Really?” but in their eyes you could tell they were still thinking, cocaine. Sometimes, however, it worked and we would feel vindicated that at least one more person saw Colombia and Colombians in a different light. 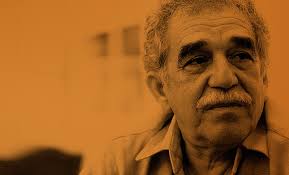 I grew up amidst people who are very proud of their heritage and defiantly challenge the world with many proofs as to why our Colombia is so much more than the illegal drug trade. And, always, those proofs included the great Gabriel Garcia Marquez.

I heard his name bandied about in my home or amidst my family when we visited Colombia. As a child he was beyond my reach. I was always interested in the writings of the literary giant but didn’t begin my journey into his worlds until I became an IB teacher.

I quickly learned why Garcia Marquez was one of literature’s greats. I’ve only read three of his novels, Chronicle of a Death Foretold, One Hundred Years of Solitude and Love in the Time of Cholera. Each one gripped me and I was fooled into believing that writing is so very easy because his stories are seamless. His narration appears effortless. And, that is how you know that he was genius at his craft.

He learned his narrative style from his grandmother who told him fantastical tales with a deadpan expression and that is how he wrote. One has no choice but to simply be swept into his narratives, be immersed in his descriptive, yet succinct, attention to detail, and allow him to take you on a splendid trip.

Fortunately, I live in a Toronto that is vastly different from the one in which I grew up. Our city (and surrounding suburbs) is home to people from all over the world. Being Colombian is no longer strange or weird. Our language, food and music has become more mainstream. Other famous Colombians are showing the world that Colombia is beautiful and so much more than it’s difficult past. We no longer have to defend our pride in our country.

Gabriel Garcia Marquez is fundamental to that pride. I am saddened that he is gone – that no more of Gabo’s stories will be published. His legacy is a beautiful and inspirational one – for Colombians and all people. A boy from the northernmost tip of his country, a remote and hot area of Colombia became a Nobel Prize Author by giving shape to a new literary genre. He did much for Colombia’s image when it was at its lowest. He did much for me as a teacher, reader and writer. Thank you Gabo and rest in peace.